TITLE: To All The Boys I’ve Loved Before

“It is the story of Lara Jean, who has never openly admitted her crushes, but instead wrote each boy a letter about how she felt, sealed it, and hid it in a box under her bed. But one day Lara Jean discovers that somehow her secret box of letters has been mailed, causing all her crushes from her past to confront her about the letters: her first kiss, the boy from summer camp, even her sister’s ex-boyfriend, Josh. As she learns to deal with her past loves face to face, Lara Jean discovers that something good may come out of these letters after all.”

©Goodreads: To All The Boys I’ve Loved Before by Jenny Han 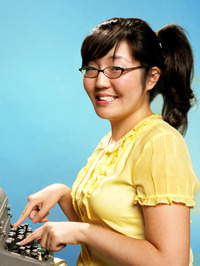 “Jenny Han was born and raised in Richmond, Virginia. She went to college at the University of North Carolina at Chapel Hill (Go Heels!) and she went on to graduate school at the New School in New York City, where she received her MFA in Writing for Children. She lives in Brooklyn.”

“It’s not like in the movies. It’s better, because it’s real.”

This is a light novel, so you can finish it within a day or two.. Definitely a page-turner, and you can’t put it down right away as long as you’re done reading it.

And I love the book cover so much!

The story is about a girl who has written five letters, not a cheesy-love-letter kind but more like I’m-over-you-I’m-sooo-done-with-you kind of letter. Those letters were not meant to be delivered to its receivers, but it will, eventually *evil laugh*. That was quite a funny moment I guess, where the letters were being sent without the protagonist’s consent. And it was really awkward! When someone you loved from the past or let’s say, your long time crush will be able to read your secrets, your true feelings, your inner desires, that would be embarrassing and humiliating, right?!

“My letters are for when I don’t want to be in love anymore. They’re for good-bye. Because after I write in my letter, I’m not longer consumed by my all-consuming love…My letters set me free. Or at least they’re supposed to.”

The book doesn’t just talk about those letters, it was also about three sisters who has shown a conventional type of family, these are the Song Girls – Margot, Lara Jean, and Katherine. These three are so adorable! I love every single one of them especially Katherine (Kitty), youngest in the Song Girls, because of her bold and adventurous spirit. As for Margot (Gogo), I also like her for being so organize and responsible in everything. As the eldest among the sisters, it was great that she set herself as a good example for the younger ones, that Margot would be that ‘someone’ they admire and look up to. And for Lara Jean, the one next to Margot, (and also the “girl” who wrote those letters, and the one who has experienced a lot of things under pressure, about the life itself, and how would she be able to overcome it) I love her character so much because she’s quirky and fun to be with. She’s a good sister. I mean, all of them are. Despite their differences, they still manage to keep their relationship strong and intact. It made me wish that my sisters and I were this close.

And among those 5 guys in the letters, Peter Kavinsky is the one I love the most *omg Peter!*. I pictured him as a handsome guy with a humurous attitude, and he’s fun to be with that’s why Lara Jean fell in love with him. I don’t know if I should hate or love Josh Sanderson, because sometimes it’s between the two. But I love the fact that he’s close to the Song-Covey’s family, it’s one of a kind relationship you know. And the Song girls dad, Dr. Covey, he’s a great father. It’s hard to raise a family without a partner’s help or without someone, especially if a person is a single dad. It’s a good thing that he tries, he tries so hard to be a good father, and the outcome is great because his daughters get to live a better life. They know how to cook and clean, they all know their responsibilities, and I think, that is what makes someone a good dad, a good parent. And for Chris, I don’t know if I like her or not, but she’s quite a good friend too.

“Relationships are incredibly amorphous. They could get back together. They could stay friends. Who’s to say what will happen in the future?”

As for the whole gist of the story, it is entertaining!!!
A must read to everyone who loves contemporary fiction/romance stories ♥