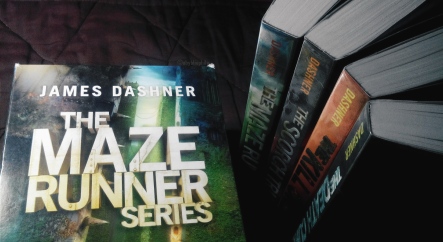 When Thomas wakes up in the lift, the only thing he can remember is his name. He’s surrounded by strangers—boys whose memories are also gone.

Nice to meet ya, shank. Welcome to the Glade.

Outside the towering stone walls that surround the Glade is a limitless, ever-changing maze. It’s the only way out—and no one’s ever made it through alive.

Everything is going to change.

Then a girl arrives. The first girl ever. And the message she delivers is terrifying.

One of my favorites!

The Maze Runner, first book in The Maze Runner series, is an action-packed, thriller novel that will leave the readers breathless. It is exhilarating, and full of astonishing scenes. It is about a group of boys who were trapped inside the maze and they didn’t remember a thing except for their names.

“James Dashner was born and raised in Georgia but now lives and writes in the Rocky Mountains. He is the author of the #1 New York Times bestselling Maze Runner series: The Maze Runner, The Scorch Trials, The Death Cure, and The Kill Order. His newest series is The Mortality Doctrine: The Eye of Minds, The Rule of Thoughts, and The Game of Lives.”

But, really, the fun has only just begun. I have a brain bursting with ideas, and many of them won’t rest until I let them out of the cage and into your hands. Thank you again for sticking with me. We are the Dashner Army, and we are strong. I’m glad we’re on this journey together, and I look forward to every step.

Dreaming about the grievers

What made me read this book is because of its unique premise and story line. I never thought of being trapped inside a huge maze, and forced to live there for a long time. Thinking about it makes me cringe, and scared because what will happen if you get stuck in that maze, right?

“Looks like a maze,” Thomas whispered, almost laughing to himself. As if things couldn’t have gotten any stranger. They’d wiped his memory and put him inside a gigantic maze. It was all so crazy it really did seem funny.

The story is well-written, I like how Dashner illustrate the whole setting of the story, in fact he really described it in a more accurate and specific way which really helped me to form a mental image or somehow, to visualize the concept of the whole plot of the story.

He glanced upward again, half expecting it to have changed back to normal. But it was all gray. Not cloudy, not twilight, not the early minutes of dawn. Just gray.

The sun had disappeared.

The story also has that mood and it has that different kind of perspective when it comes to the characters. They’re using words which we called “Glader’s slang”, like shanks, shuck-face, klunk, slim-it, slinthead and etc. Click for Glader Slang (glossary terms)

All I can say is… WOW! This novel did not disappoint me, well the movie adaptation does… because the story was a lot more different in the film. (It has been always the issue… what’s new? haha). It’s way too scary than the film because the details of the story was delivered in a more precise way. I imagined myself standing in the middle of the Glade, surrounded by the Grievers. I also imagined Minho saving me from them (it’s not that I don’t like Thomas, but Minho’s much more attractive – for me ♥).

My heart aches for Chuck’s death. He’s one of the characters that I love next to Minho. 😦

The Maze Runner is now my favorite dystopian novel! If you haven’t read it, you’re missing half of your life already shanks! LOL 🙂